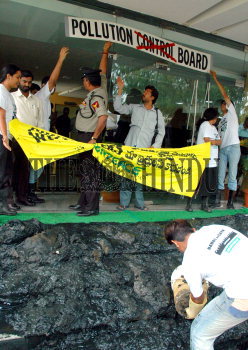 Caption : Toxic graveyard ! The Greenpeace activists dump foul smelling toxic sludge at the main entrance of Andhra Pradesh Pollution Board head office at Santhnagar in Hyderabad on July 27, 2005. The buckets loads of toxic sludge was collected from Asanikunta lake of Patancheru to protest against the decade old toxification of Industrial in Patancheru, the houses of the biggest manufacturers of bulk drugs, Pharmaceutical formulations and pesticides. According NGRI reported high quantities of arsenic close to 700 times which is above the permissible levels and they are demanding closure of all polluting industries in the Medak district. Photo: Mohammed Yousuf.