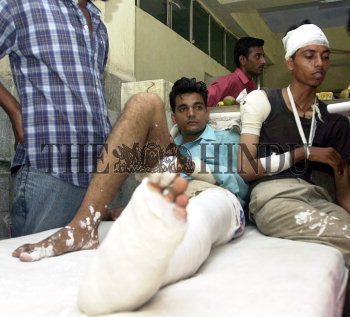 Caption : Injured Honda workers admitted at the Civil Hospital in Gurgaon, Haryana, on July 26, 2005. Riot police and workers of Honda Motorcycle and Scooter India (HMSI) clashed for a second day after hundreds of workers, seeking higher wages and re-employment of suspended employees, were injured in pitched battles on July 25, 2005. The situation continues to be volatile on July 26 with workers alleging that hundreds of their colleagues had gone "missing" from government hospitals. This led to fresh violence. Photo: Ramesh Sharma