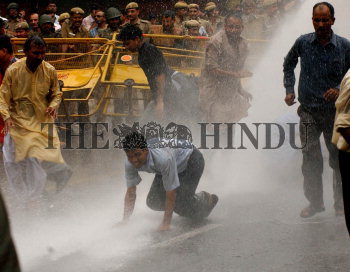 Caption : Police use water cannons to disperse the activists of the Left Parties who were staging a demonstration in support of the Honda workers outside the Haryana Bhavan in New Delhi on July 26, 2005. The activists condemned the act of Haryana riot police which mercilessly beat up and injured hundreds of workers of Honda Motorcycle and Scooter India (HMSI) who were staging a demonstration, seeking higher wages and re-employment of suspended employees, in Gurgaon, Haryana on July 25, 2005. Photo: Kamal Narang