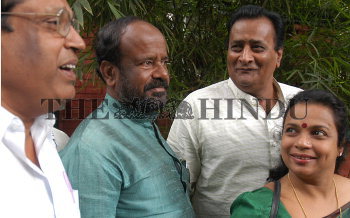 Caption : Film and theatre ARTISTES-turned MLCs,"Mukhyamantri" Chandru (ext left) and Umashree (ext right), along with the Chairman of the Karnataka Nataka Academy, Srinivas G. Kappanna (second left) and the Gubbi Veeranna Award winner, Gudigeri G. Basavaraja, at a press conference in Bangalore on July 26, 2005. The release of Rs. 1.25 crore by the Karnataka Government for disbursing the long-pending monthly pension to 1,600 writers and ARTISTES and widows of ARTISTES and writers was announced at the press meet. Photo: V. Sreenivasa Murthy