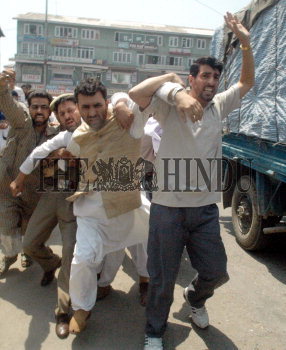 Caption : Activists of All Parties Hurriyat Conference (APHC) being taken into custody by the police during a protest rally in Srinagar on July 25, 2005. Dozens of activists protested against killing of three teenaged boys by army at Villgam in Trehgum on July 23, 2005 night. Photo: Nissar Ahmad