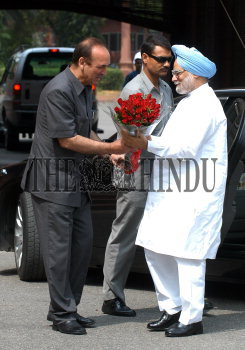 OPENING OF THE MONSOON SESSION AT PARLIAMENT HOUSE

Caption : The Prime Minister, Manmohan Singh, being received by the Union Minister for Parliamentary Affairs, Ghulam Nabi Azad (left), on his arrival at the Parliament House in New Delhi on the opening day of the Monsoon Session on July 25, 2005. Photo: V. Sudershan