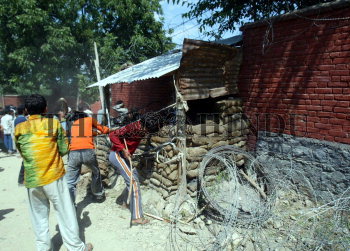 Caption : Villagers damaged the police vehicle after the killing of three teenage boys in Villgam, 105km north of Srinagar on July 24, 2005. Thousands of people protested against the army on Sunday, a day after security forces shot dead three teenaged boys mistaking them for militants, police and witnesses said. Photo: Nissar Ahmad