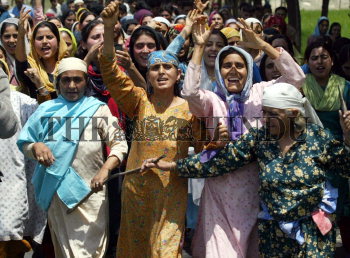 Caption : Villagers and relatives cry over the killing of three teenage boys in Villgam, 105km north of Srinagar on July 24, 2005. Thousands of people protested against the army on Sunday, a day after security forces shot dead three teenaged boys mistaking them for militants, police and witnesses said. Photo: Nissar Ahmad