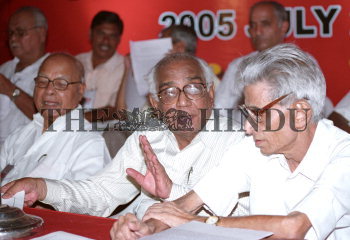 Caption : The CITU All India general secretary, Chithabratha Mazumdhar, president, M.K. Panthe and vice-president, E. Balanandan holding discussions with other members at the general council meeting of the CITU in Alappuzha on July 23, 2005. Photo:Johney Thomas