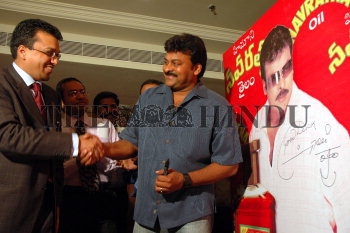 Caption : Megastar Chiranjeevi, who is named Brand Ambassador for Navratna Oil of Emami Group, endorsed the deal with his signature on big hoarding of the Company, being greeted by the Company Director, Harsha V. Agarwal in Hyderabad on July 21, 2005. He will feature in the commercial, which will hit the media by September-2005, according Emami Company, hoping for 30 percent rise in the product sales. Photo: Mohammed Yousuf