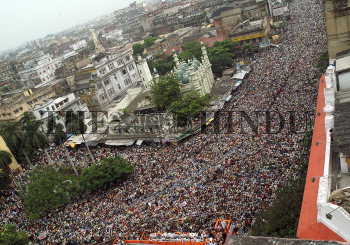 Caption : Trinamool Congress leader, Mamata Banerjee called a rally to commemorate the death of 13 Youth Congress supporters in police firing in 1993, on the same day after 12 years, in Kolkata on July 21, 2005. Photo: Sushanta Patronobish