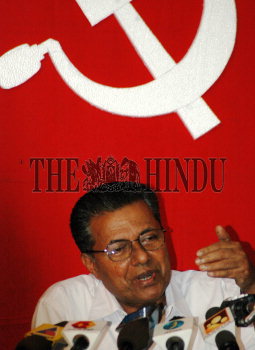 Caption : The State secretary of the Communist Party of India (Marxist), Pinarayi Vijayan, addressing a press conference in Kochi on July 20, 2005, on the controversy over the cancellation of KSEB-Lavalin deal. Photo: Vipin Chandran