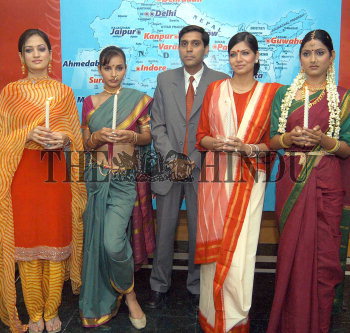 Caption : Manager, Home and Entertainment Division Microsoft India, Mohit Anand (C) poses with Indian models dressed in traditional regional costume at a press meeting to announce their 'Project Vistaar' in New Delhi July 20, 2005. Microsoft announced 'Project Vistaar' to expand its channel distribution network in India and increase the reach of its sales teams to some 26 cities across the country. Photo: Kamal Narang