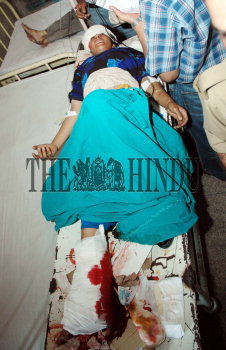 Caption : A civilian who was injured in a car blast is being treated in SHMS hospital in Srinagar on July 20, 2005. A suicide bomber slammed a car into a military jeep, killing six Army soldiers and injuring more than twenty civilians in the blast. Photo: Nissar Ahmad