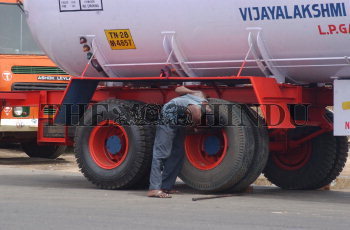 Caption : Empty LPG tankers were seen waiting outside the Indian Oil bottling Unit at Ennore, 25 kilometres North of Chennai. The strike which was called on by the All India Motor Transport Congress, entered the third day, as the cooking gas refill bookings with the LPG distributors witnessed a sharp increase overnight. This, as described by the major oil corporation, is a panic response by the consumers throughout the State. Here a driver of a huge LPG tanker lorry is seen changing the tyres of the carrier. Photo: S.R. Raghunathan 20-07-2005