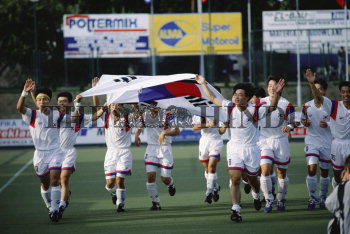 Caption : Korean players celebrate with their national flag as they do the victory lap after winning the Inter Continental CUP hockey tournament, beating Spain in the final, in Poznan, Poland, on August 29, 1993. Korea beat Spain by 1-0 to lift the CUP. Photo: Vino John