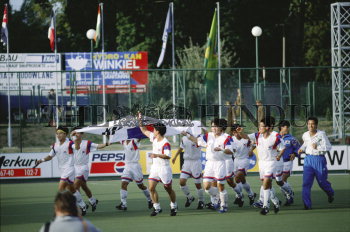 Caption : The jubilant Korean hockey team members carry their national flag during a victory lap after they beat Spain in the men's hockey final of the Inter Continental CUP 1993 in Poznan, Poland, on August 29, 1993. Korea beat Spain by 1-0 to lift the CUP. Photo: Vino John