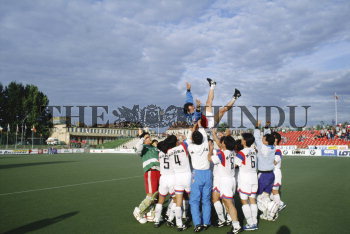 Caption : Korean players toss up their coach in celebration after their team's victory over Spain in the men's hockey final of the Inter Continental Cup 1993 in Poznan, Poland, on August 29, 1993. Korea beat Spain by 1-0 to lift the cup. Photo: Vino John