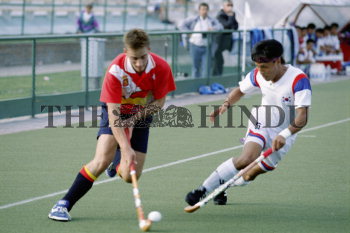 Caption : Xavier Arnan of Spain moves with the ball as Cho Myung Jun of Korea tries to stop him in the men's hockey final between Korea and Spain during the Inter Continental CUP 1993 in Poznan, Poland, on August 29, 1993. Korea beat Spain by 1-0 to lift the CUP. Photo: Vino John