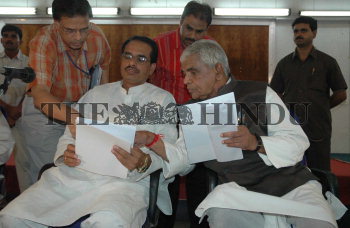 Caption : The Madhya Pradesh Chief Minister, Babulal Gaur along with the State BJP president, Shivraj Singh Chauhan at an interactive session for the sake of better coordination between the BJP-led State Government and ruling party organisation at Deendayal Parisar in Bhopal on July 18, 2005. Photo: A. M. Faruqui