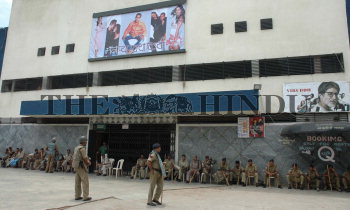 Caption : Police personnel keeping vigil outside the Raj Theatre in Bhopal, where Bollywood Star, Salman Khan's film 'Maine Pyar Kyon Kiya' being screened on July 17, 2005. Bajrang Dal and BJP activists are preventing the screening of film, on the last two days due to the alleged connection of Salman Khan with underworld. Photo: A.M. Faruqui