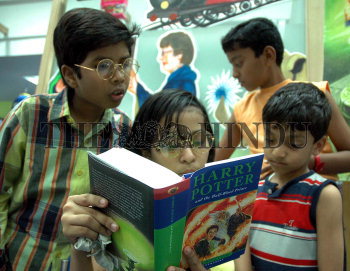 Caption : Avid Harry Potter fans browsing through the just released book `Harry Potter and the Half Blood Prince', at the British Library in Bhopal on July 16, 2005. The sixth volume in the series by J.K. Rowling went on sale all over the world. Photo: A.M. Faruqui