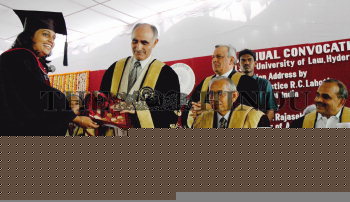 Caption : The Chief Justice of India, Justice, R.C.Lahoti, the Chief Minister Y.S.Rajasekhara Reddy watching as the Acting Chief Justice of A.P High Court and the Chancellor of the NALSAR University of Law, Justice Bilal Nazki, presents Gold medals to Katragadda Amita Choudary, for best student for overall excellence in the third convocation of the University held in Justice City in Ranga Reddy district on July 16, 2005. Photo: Mohammed Yousuf