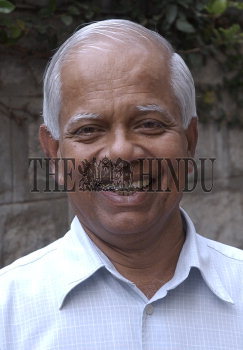 Caption : The Air Marshal (Retd.), Philip Rajkumar, talking to 'The Hindu' in Bangalore on July 15, 2005. The Air Marshal along with the Lieutenant General (Retd.) B.S. Malik (not in pic), met their one-time neighbour and friend, now President of Pakistan, General Pervez Musharraf, after 15 years. The two retired Indian defence officers, along with 16 others, were at Islamabad to attend the fifth reunion of the 1990-batch of the Royal College of Defence Studies (RCDS), London. The alumni decided to have the reunion at Islamabad and immediately Gen. Musharraf agreed to host it. Photo: K. Bhagya Prakash