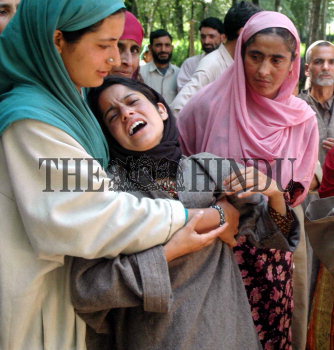 Caption : Villagers of Roshanabad in Dooru area of Kulgam, South Kashmir, staging a demonstration on July 15, 2005 protesting against the killing of a girl by an army soldier who was later shot dead by CRPF personnel on July 13. The jawan, posing as a militant, forced his entry into the house of one Mohammad Akbar Dar in Roshanabad and demanded food and shelter. Dar's 17-years-old daughter Zahida refused after which he stabbed the girl and shot her dead, the reports said. While fleeing, the jawan was chased by the villagers and a CRPF party patrolling the area fired at him causing his death. Photo: Nissar Ahmad