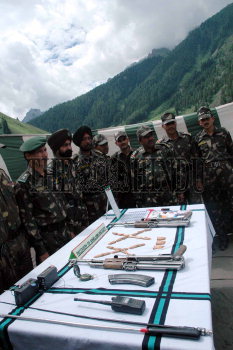 Caption : Army soldiers display the arms and ammunition which they recovered from the slain militant who was killed in an encounter at Guraz Sector near the Line of Control ( LOC ) 190kms of North of Kashmir on July 15, 2005. Army officals said that nine militants were killed who infiltrated from other side of LoC. The three days operation is going on. Photo: Nissar Ahmad