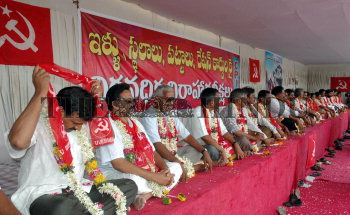 Caption : The State Committee of the Communist Party of India (Marxist) launched an indefinite hunger strike in Hyderabad on July 15, 2005 to mount pressure on the Government to concede its demands for distribution of house sites, house site pattas and ration cards to the urban poor. Twenty five leaders led by the party's State secretariat member, Y. Venkateswara Rao, participated in the fast. Photo: K. Ramesh Babu