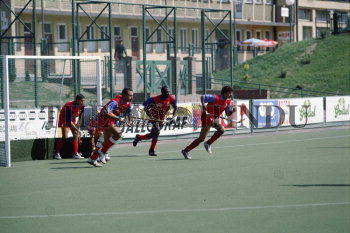 Caption : Cuban defenders rush towards the ball from their goal area during a penalty corner in the men's hockey classification match between Cuba and Ireland in the Inter Continental Cup 1993 at Poznan, Poland, on August 29, 1993. Photo: Vino John