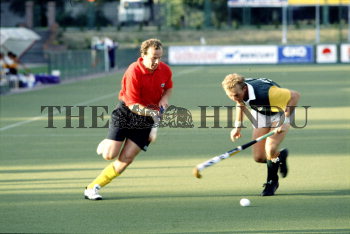 Caption : Bernard Cuvelier of Belgium (left) and Giles Bonnet of South Africa fight for the ball during the classification hockey match between Belgium and South Africa in the Inter Continental Cup 1993 at Poznan, Poland, on August 28, 1993. Photo: Vino John