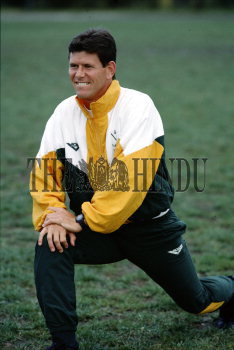 Caption : Wayne Graham, captain of South Africa, stretches his muscles at the team's training session before the classification match against Belgium during the Inter Continental Cup hockey tournament at Poznan, Poland, on August 29, 1993. Photo: Vino John