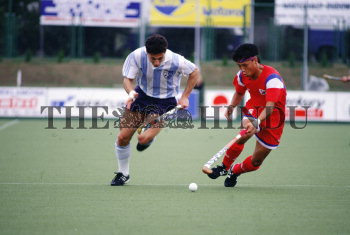 Caption : Argentina's Gabriel Minadeo trying to get past Korea's Cho Myung Jun in the men's hockey semifinals between Argentina and Korea during the Inter Continental Cup 1993 in Poznan, Poland, on August 27, 1993. Korea beat Argentina by 1 goal to nil and entered the final. Photo: Vino John