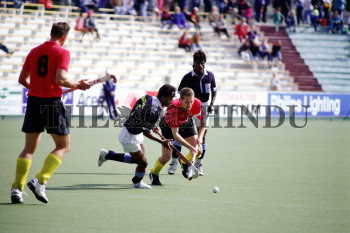 Caption : Atif Idris of India trying to get past Belgian captain Robert Gucassoff, watched by India's Dhanraj Pillay, in the men's hockey match between Belgium and India during the Inter Continental Cup 1993 in Poznan, Poland, on August 25, 1993. Photo: Vino John