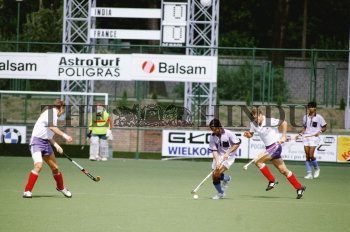 Caption : Imran-ul-Haq of India weaving his way through French defenders Oliver Camus and Ruault Stephane in the men's hockey match between France and India during the Inter Continental Cup 1993 in Poznan, Poland, on August 24, 1993. Photo: Vino John