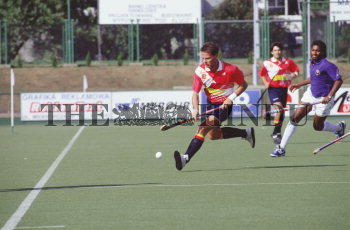 Caption : Xavier Escude of Spain chasing the ball to take possession as Malaysia's Shanker Ramu follows him during the men's hockey match at the Inter Continental CUP 1993 in Poznan, Poland, on August 23, 1993. Photo: Vino John