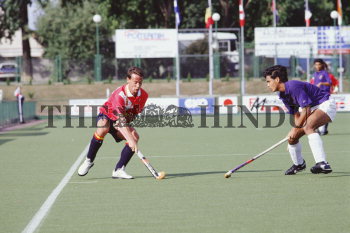 Caption : Spain's Xavier Escude trying to take the ball away from Malaysian player Calvin Fernandez in the men's hockey match between Malaysia and Spain during the Inter Continental Cup 1993 in Poznan, Poland, on August 23, 1993. Photo: Vino John