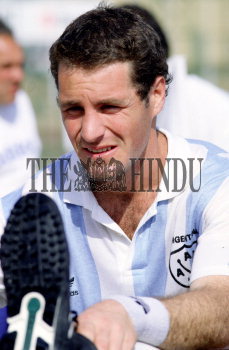 Caption : Alejandro Doherty of Argentinian hockey team snapped during a workout at a training session before the men's hockey match between Argentina and India in the Inter Continental Cup 1993 in Poznan, Poland, on August 20, 1993. Photo: Vino John