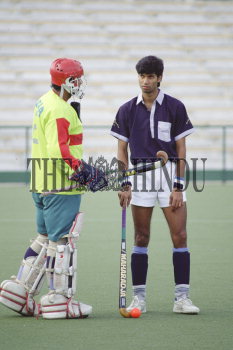 Caption : Indian custodian Ashish Ballal having a word with his teammate Cornelius D'Costa before the start of the men's hockey match against Argentina at the Inter Continental Cup 1993 in Poznan, Poland, on August 20, 1993. Photo: Vino John