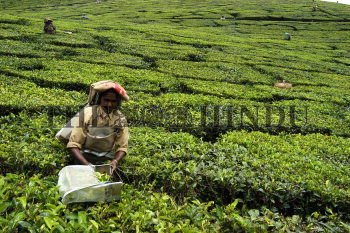 Caption : A woman worker plucking the TEA leaves at a plantation in Devikulam in Kerala's Idukki District. The closure of many TEA estates in the state and the neglect of existing plantations resulted in a drop in the production of TEA in the state. The net production currently stand at 49.7 mkg in 2004 from 68 mkg in 2000, following a drop in prices. Photo: K. K. Mustafah 12/07/2005