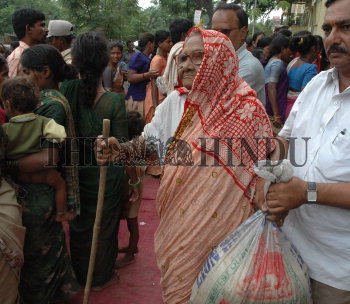 Caption : Eighty- year- old Zulekha Bee is leaving with foodgrains distributed by the Andhra Pradesh Minister for Revenue, Dharmana Prasad Rao (not in picture) in Hyderabad on July 11, 2005, for Bagh Lingampally, which was badly affected by the downpour. Photo: P. V. Sivakumar