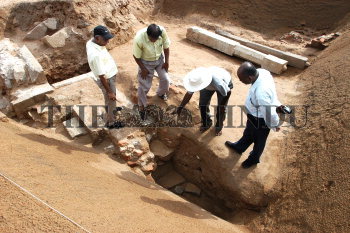 Caption : T. Satyamurthy (ext left), Superintendent Archaeologist, Archaeological Survey of India (ASI), Chennai Circle, along with other officials examining the remains of a Subrahmanya temple belonging to the Pallava period (circa 8th century A.D.) which has been unearthed on the beach close to the Atiranachandesvara cave-temple, popularly called the Tiger Cave, a few kilometres off Mamallapuram, near Chennai. The discovery has renewed the debate whether the temple was one among the Seven Pagodas that reportedly existed on Mamallapuram's shores that are famed for its Pallava monuments. The Archaeological Survey of India (ASI), Chennai Circle, had unearthed in February and March this year the massive remains of a Pallava temple a few hundred metres from the Shore Temple. The remains of this 1,200-year-old temple include two granite pillars. While one pillar bears the inscription of the Pallava king Dantivarman, and is dated to 813 A.D., the other pillar has an inscription of another Pallava king, Nandivarman III, and is dated to 858 A.D. Photo: Shaju John