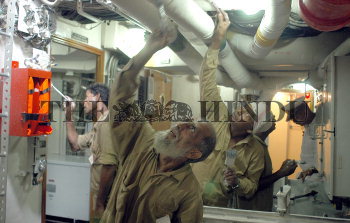 Caption : Manjur Alam, Apurba Pramanik, Md. Ishlam and Rabindranth Tudu are the employees of Garden Reach Ship Builders Ltd. busy giving the final touches before commissioning the war ship INS Beas, which is ready for her exclusive "Blue water" voyage at Garden Reach Ship Builders in Kolkata on July 10, 2005. They have been working for over three decades with the century old ship building company and were part of nearly 20 war ships building team. INS Beas is the third ship of the indigenously designed and built Brahmaputra Class Guided Missile Frigates. The ship is a reincarnation of the earlier INS Beas, a Leopard Class Frigate purchased from the United Kingdom in 1960. She is 125 meters (about 400 ft) in length and has a maximum breadth of 14.5 meters. Her displacement is 3600 tonnes. The ship is propelled by two steam turbines, which in turn drive two propellers through a double reduction gear box resulting in speeds in excess of 30 knots (about 55 kmph). INS Beas is built for extended "Blue Water" naval operations and is capable of covering over 4500 nautical miles without any replenishment. She has the capabilities of sensing the long-range with radors, sonars and electronic warfare equipment, which enables her to simultaneously address targets operating in all the three mediums, the surface, underwater and air. The ship is equipped with the latest and first indigenous EW system Ellora, to "hard kill" measures involving physical distraction of the missile using the Barak Anti Missile Defence System and guns. The ship will be commissioning onJuly 11, 2005. Photo: A. Roy Chowdhury