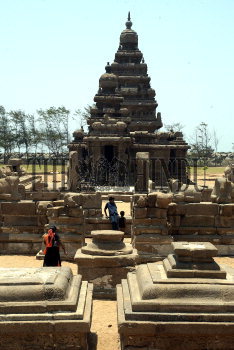 Caption : A view of the Mahabalipuram shore temple. The temple city of Mahabalipuram (also known as Mamallapuram) is situated about 60 km off Chennai on the Bay of Bengal coast in the South Indian State of Tamil Nadu. The ancient Mamallapuram, as Mahabalipuram was formerly known, was a flourishing port town of the Pallava rulers of South India who chiselled in stone the fabulous "open-air museum" of sculptures. Most of the temples and rock carvings of this place were built during the reigns of Narsimha Varman I (AD 630-668) and Narsimha Varman II (AD 700-728). The five rathas (CHARIOTS) are architectural precursors of the temples of South India. The smallest and the simplest is the Draupadi ratha and the largest is the multi-storeyed Dharmaraja ratha scoped from a monolithic rock. Photo: K. Pichumani. 10-07-05