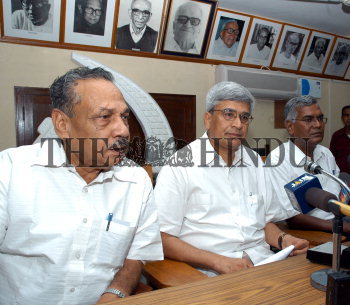 Caption : Abani Roy, RSP leader, Prakash Karat, General Secretary of Communist Party of India, (Marxist) and D. Raja, Secretary of the National Council of the Communist Party of India, at a press conference at the CPM Central Committee Office, in New Delhi on July 10, 2005, after a meeting with the Chairperson of the United Progressive Alliance, Sonia Gandhi (not in pic), regarding the disinvestment of shares in the BHEL and the Navratna Companies, in New Delhi on July 10, 2005. Photo: Shanker Chakravarty