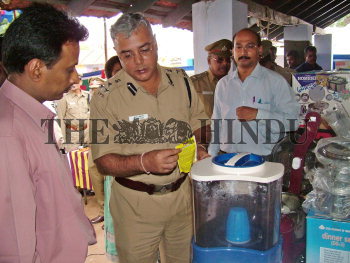 Caption : The city Police Commissioner, Karan Singha and the Territory Manager of Bharat Petroleum Corporation Limited (BPCL), R. Somasundaram, taking a look at an array of items on sale at the city Police LPG Agency, when the BPCL launched its `Beyond LPG initiative', as part of its Strategic Business Operations (SBO) at the Police Recruitment School, in Coimbatore on July 9, 2005. Photo: M. Periasamy