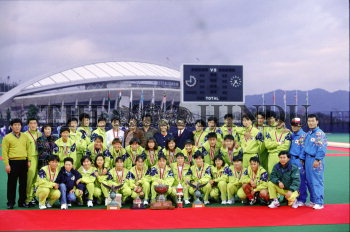 Caption : Both MEN and woMEN members of the Korean team, who won the MEN's and woMEN's hockey titles respectively, seen with their cups and trophies at the Asia Cup 1993 in Hiroshima, Japan on November 14, 1993. The main gallery and the electronic scoreboard are seen in the background. Photo: Vino John