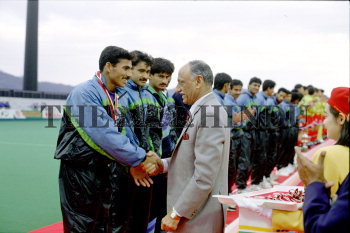 Caption : Indian captain Shakeel Ahmed shakes hands with an official on the podium during the presentation ceremony of the Asia Cup 1993 in Hiroshima, Japan on November 14, 1993. Indian team lost to Korea in the men's hockey final and became the runner-up. Photo: Vino John