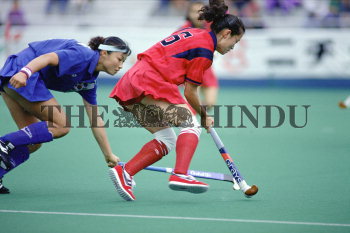 Caption : Chinese player Wang Yan Long goes forward with the ball as Korea's Lee Eun Young tries to intercept her during the women's hockey final between China and Korea at the Asia Cup 1993 in Hiroshima, Japan on November 14, 1993. Korea beat China by 3 goals to nil. Photo: Vino John