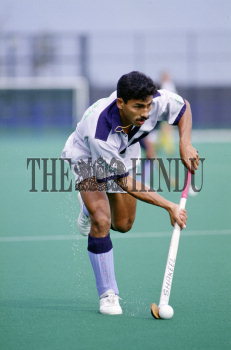 Caption : Shakeel Ahmed, Indian captain, hones his dribbling skills during the team's practice session before the men's hockey match between India and Kazakhstan at the Asia Cup 1993 in Hiroshima, Japan on November 5, 1993. Photo: Vino John