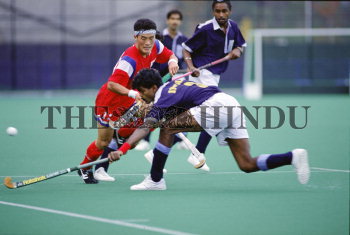 Caption : Anil Aldrin of Indian team stops the movement of Korea's Jeong Yong Kyun during the men's hockey final between India and Korea at the Asia Cup 1993 in Hiroshima, Japan on November 14, 1993. Korea beat India by 1-0. Photo: Vino John