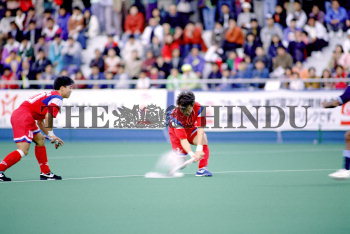 Caption : Korea's Shin Seok Kyo (right) hits the ball as his teammate Choi Jung Ho looks on during the penalty corner in the men's hockey final between India and Korea at the Asia Cup 1993 in Hiroshima, Japan on November 14, 1993. Korea beat India by 1 goal to nil. Photo: Vino John